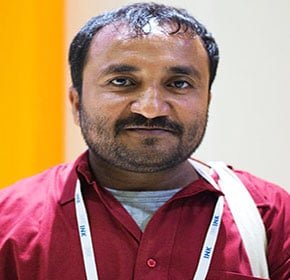 Anand Kumar is an Indian mathematician and columnist for mathematical journals and magazines internationally. He is best across the country for his Super 30 coaching center where financially backward students get education free of cost. A documentary film on his activities made the Discovery Channel. He was invited by the Massachusetts Institute of Technology (MIT). A biopic movie of his life will be filming in recent.

Anand Kumar was born on January 1, 1973, in Patna, Bihar, in a lower class family. His father was a clerk in the postal department of India who could not afford son’s private schooling. Reluctantly Anand admitted into a Hindi medium government school. He developed his keen interest in Mathematics during that time.

He made some notes depending on number theories during gradation which was published in Mathematical Spectrum and The Mathematical Gazette. In the meantime, he secured admission to Cambridge University, but could not join due to his financial crisis and the death of the father. In the Super 30, every year 30 students get chance whom given IIT entrance training free of cost. The institute selects 30 intelligent financially backward students by a competitive exam where lots of students took part in the exam every year. For these thirty students, his mother makes food and Kumar would ready others task relating study. They get the chance to stay in the hostel for a year. From the institute, 391 students get the chance in the IIT entrance exam out of 450 between 2003 and 2016. In 2017, among the 30 students, 30 were selected by the IIT (Indian Institute of Technology).

For the Super 30 coaching center have government support or other private organization. When his coaching center gradually growing many companies come to belonging sponsor but respectively refused them. Anand wishes more development for the institute and cost behind the center as much he earns by giving tuition in another institute.