Move over, Range Rover. The Hummer is becoming king of the road as most folks believe you are what you drive. Featuring a daunting design, this six-seater beast is a  head turner.

The SUV enjoys a cult following among enthusiasts around the globe. A bunch of famous Indians drive Hummers too.

Check out all the Indian celebs who also own this SUV. Remember the picture from last year when New Zealand players sat in a bus with massive awe on their faces as Dhoni drove his Hummer alongside in Ranchi. The former Indian captain owns the Hummer H2 that is priced at ₹75 lakh roughly. Mika Singh owns a fleet of swanky and exorbitantly expensive cars, including his most favorite orange Hummer. Referring to his Hummer as his girlfriend, the Punjabi pop singer expressed his love for the vehicle in a Twitter post. Not only Mika, but popular Indo-Canadian punjabi singer Jazzy B’s also owns a custom Hummer in a bright yellow color. Former Indian off-spinner Harbhajan Singh has a black Hummer sitting pretty in his garage too. He often share pictures of him with his prized possession on social media. 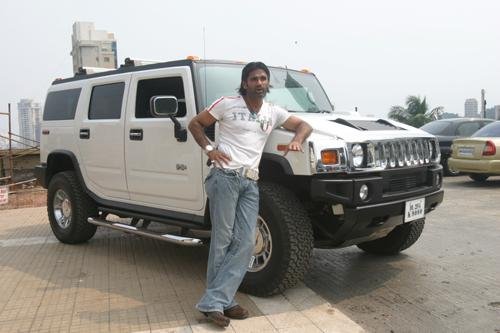 The actor owns a civilian version of the Hummer H3, which was once used by the US military. However, he was asked to pay extra excise duty on his imported purchase. And in 2012 Shetty’s car was seized by the Directorate of Revenue Intelligence.